Several species of waders are traditionally hunted in European countries including European Russia. These are primarily Woodcock, Great Snipe, Common Snipe and Jack Snipe. Hunting on Whimbrels is popular in autumn in some areas of the Russian Far East, where these birds are called “yagodnik” in Russian (=berry-eater).

A majority of small-sized species of waders (with exception of snipes) are not valued as objects for sport hunting or culinary. Such waders as plovers, sandpipers or shanks has never been specially hunted in Russia, although they can be shot as a “near water” game which consists of waders and rallids, but not further specified. However, hunting on waders on seacoast is widespread in several countries, which presumably is a reason of relatively low numbers of these birds on the East Asian-Australasian Flyway (Parish et al. 1987). Resolution of the Fourth Meeting on waders (Donetsk, The Ukraine, 1990 – see “Information of the WGW”, 1992, Novosibirsk, pp. 3-5) suggested pleading for removal of small-sized waders from a list of hunting species with view of preventing their extermination. Authorities have not accepted this appeal, and an Act of the Government of the Russian Federation again listed all waders except rare species as “conditional game”, ignoring protests of NGOs and some governmental agencies. Such attitude to hunting on waders in Russia has put the country in a row with economically and culturally undeveloped countries.

A catastrophic decrease in numbers of the Great Snipe became apparent during the 20th century. This resulted in inclusion of the species into Red Data books of several countries and regions of Russia, and also in development by BirdLife International of an «Action Plan» on conservation of this species. Scientific community made an attempt to officially include the Great Snipe in the Red Data Book of Russia during preparation of the second edition of the book, but had no success due to opposition from sniffing dog hunters. A refusal was officially motivated by insufficient data available on species numbers and recent number dynamics. Collection of this information should become a priority for Russian ornithologists. 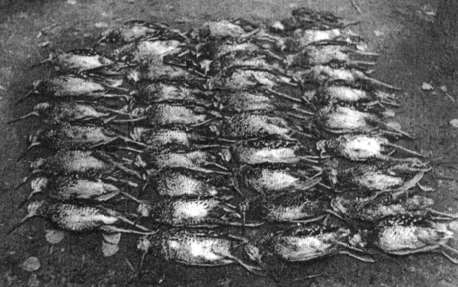 After exeptionally successful hunting with english setter on Great Snipe lek in the Cheptsy River floodplain (Russia). Photograph from book by M.P.Pavlov